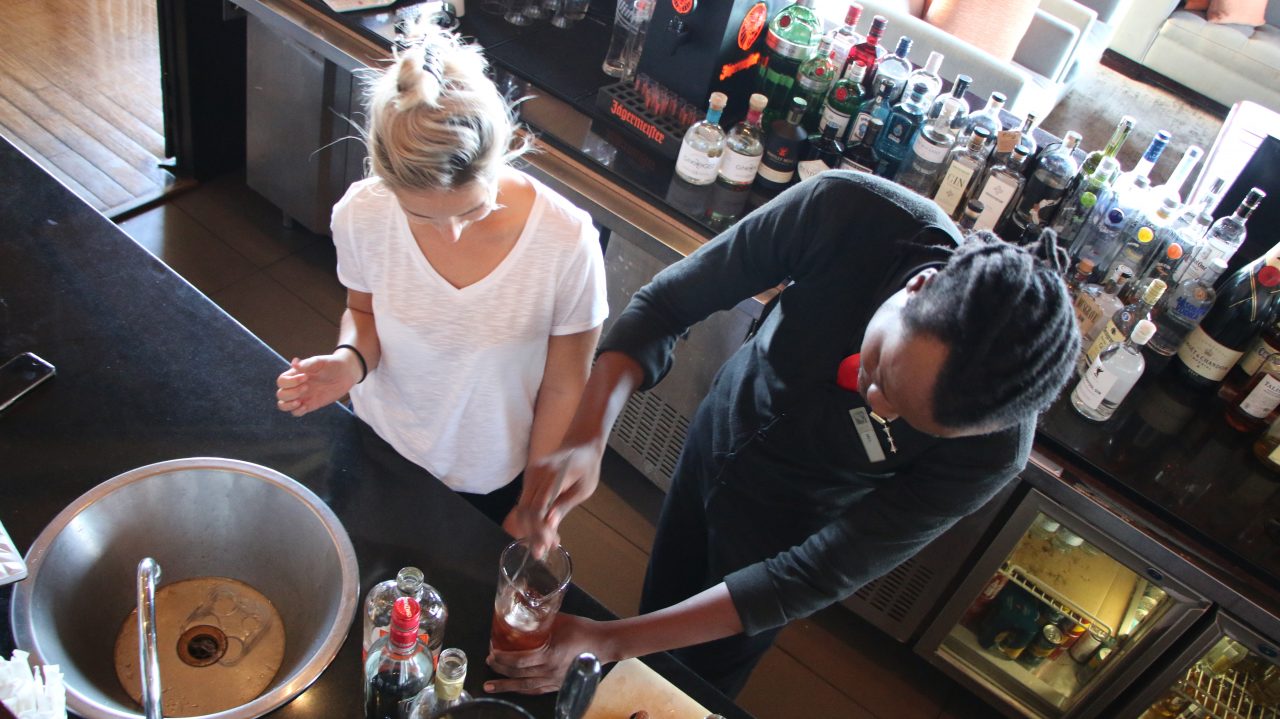 I see him mixing and shaking as I walk into the 31 Degrees bar at the Fairmont Zimbali Resort Hotel. The atmosphere is elegant, refined and luxurious, Mel, our mixologist in question, exudes these three things and more.

Delving into a bit of Mel’s background on how he came to be a mixologist, he explains to me that he was born in Cape Town, where he studied his degree and worked his way into (or behind) the bar. Initially, Mel worked as a young waiter in Cape Town, until one day when the lead bartender at the restaurant he was working at, was off sick and he was asked to step in behind the bar. The chef, Neil, as Mel still remembers, taught him how to make his very first Moijito! Seeing his guests devour the drinks he made and enjoying the process of mixing flavours and spirits, Mel then applied, and was offered, the permanent position of bartender.

Following on from his hospitality stint in Gardens, Cape Town, Mel applied for a position behind the bar of one of Abu Dhabi’s top hotels. Due to the fact that alcohol in Abu Dhabi is not permitted or encouraged, Mel was the lead Mocktail bartender at the hotel. Mel spent a year enjoying the experience in the East, learning a lot about the international clientele that visited these exclusive hotels, about service, bar etiquette and flavours. Before leaving the East, Mel decided to apply for a position as a waiter at the Fairmont Zimbali Resort. Getting the job meant that he could come home and live by the Coast, which was his intention.

It was quite clear to the now head of Human Resources at Fairmont, Verona, that Mel was made to be behind the bar and offered him the job of bartender at the 31 Degrees Bar. World class training ensued, and this is where Mel qualified as a mixologist. Through these world renownedcourses, he learnt to create drinks at any given time, not only serve them. A mixologist can take anything, such as Amarula, and create a drink from whatever is around him.

“Being a mixologist is all about mixing flavours. Mixing spirits, sweet and sours additives and so forth”. A typical day for Mel will start around three in the afternoon (he despises waking up early, so this works perfectly for him) and he ends his shift around two in the morning. Upon arriving, Mel makes sure he has all his tools behind the bar ready to go and all his drinks are full and set to be poured. Once his bar is in order, he puts on his attitude and is ready to ‘wow’.

On an average day, Mel will serve around 50 drinks, his favourite being an ‘African Queen’. This is definitely a manly man’s drink! Strong as anything and aims to put hairs on your chest!

Throughout the afternoon, Mel taught us his wealth of knowledge behind the bar and we couldn’t have been happier, as it’s not often that a layman gets to learn about the true science behind making the ‘perfect’ drink! I shaked (spilled) and learnt that it’s not just about pouring that shot of gin and adding a tonic, it’s about the lemon you wash around the glass and the cucumber peel you add to various gins according to their scents and their hidden notes! It’s all about the shape of the ice cubes, the stirring velocity and direction as well as the time of day and season! Yes, there really is an answer to every drink and it’s not as simple as a mojito!

Having the pleasure of working with Mel for the entire afternoon may (or may not) have been a good thing as we mixed, shaked and stirred our way around the bar, taking in what he had to say about flavours, spirit partnerships, egg whites (don’t ask) and tasting one (maybe more) of his divine creations. Ultimately, a day working for the rich and famous, with a backdrop as gorgeous as the one the Fairmont has to offer makes for not a bad day at the office at all!